Thomas Bach OLY(born 29 December 1953) is a German lawyer, former Olympic foil fencer and Olympic gold medalist, serving as the ninth and current president of the International Olympic Committee since 10 September 2013. He is also a former member of the German Olympic Sports Confederation executive board. Bach is the first ever Olympic champion to be elected President of the IOC.

Early life and education
Thomas Bach was born in 1953 in Würzburg, West Germany. He grew up in Tauberbischofsheim, where he lived with his parents until 1977. Bach earned a doctor of law (Dr. iur. utr.) degree in 1983 from the University of Würzburg. He speaks fluent French, English, Spanish and German.

Fencing career
Bach is a former foil fencer who competed for West Germany. He won a team gold medal at the 1976 Summer Olympics, as well as silver, gold, and bronze team medals at the 1973, 1977 and 1979 world championships, respectively. He completed his last match on 26 October 1980 in Shanghai.

On 11 November 2017, Bach was formally granted the use of the post-nominal letters “OLY”.

Sign at the house of Thomas Bach from 1953–1977 at the Sonnenplatz in Tauberbischofsheim
Bach served as the President of the German Olympic Sports Confederation (DOSB), prior to becoming President of the International Olympic Committee (IOC). He resigned as the head of the DOSB on 16 September 2013, having served as President since 2006. He was replaced by Alfons Hörmann, and remained a member of the DOSB Executive Board. Additionally, he resigned as the head of Ghorfa Arab-German Chamber of Commerce and Industry. Bach will however continue to serve as the head of Michael Weinig AG Company, a company in the industrial woodworking machinery industry that has its headquarters in Bach’s hometown of Tauberbischofsheim, Germany.

Bach headed Munich’s bid for the 2018 Winter Olympics. In the host city election, Munich secured 25 votes as Pyeongchang was elected as host city with 63 votes.

Like his predecessors Juan Antonio Samaranch and Jacques Rogge, Thomas Bach lives in the Lausanne Palace when he is in Lausanne.
On 9 May 2013, Bach confirmed that he would run for President of the International Olympic Committee.

2013 IOC presidential election
Bach was elected to an eight-year term as IOC President at the 125th IOC Session in Buenos Aires on 10 September 2013. He secured 49 votes in the final round of voting, giving him the majority needed to be elected. He succeeds Jacques Rogge who served as IOC President from 2001 to 2013. Bach will be eligible to run for a second four-year term at the 134th IOC Session in 2019 until 2025. 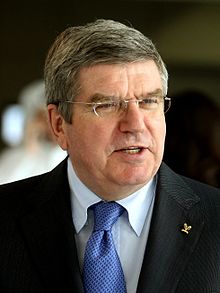